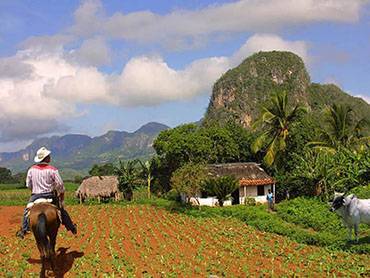 Pinar del Rio, the westernmost of the Cuban provinces, is tobacco-smelling earth, paradigmatic of the landscape images of Viñales. Its main access is by road and it’s possible to have access by sea through “María la Gorda” International Diving Centre. There are many places of interest for its landscapes, anthropological, historical and cultural values that one can be visited in this part, among them we have: the vegas (tobacco field plantations), the cigar factories, Milanés theatre, Las Terrazas Complex, the Prehistory Mural and the Indian Cave, and, of course, to dive in areas of special submarine beauty, such as Cayo Levisa and Cayo Jutías. Viñales Valley with its karst mogotes, almost unique in the world, is one of the six World Reserves of the Biosphere existing on the Island and a unique scenario Cultural Landscape and World Heritage (UNESCO). The goodness with which the nature endowed the Valley, are ideal for practicing nature tourism; Its rich vernacular tradition and its culture are shown today by its inhabitants, leaving from the last century an indelible mark on every visitor Pinar del Rio is also outstanding for being the land of the best tobacco in the world and from there it is exported for the manufacture of habanos that bear recognized quality marks. It is such a culture and tobacco tradition in Pinar del Rio that you can now take a tour of the Tobacco Route and know the whole process that takes, from its cultivation until it becomes a cigar. Pinar del Rio is the birthplace of great artists. It is an inexhaustible source of renowned composers such as Pedro Junco Jr., author of "Nosotros", versioned by more than 400 different artists, the singer of the mountain, Polo Montañez, as well as the writer Cirilo Villaverde, the author of the most important Cuban novel from the19th century, Cecilia Valdés. Has a dance music tradition like few that is sent in the late seventeenth and early eighteenth centuries with the arrival of groups of slaves from the African continent and continues thanks to events such as the Yuka Drum Festival. From the plastic art world, contemporary creator Pedro Pablo Oliva also comes from this land, whose most frequent celebration is the guateque, a campesino celebration that is always carried out around a typical Cuban meal: roast pork, congrí, tostones, yucca with mojo (Cuban spicy sauce) and other vegetables and also with drinks such as the Guayabita del Pinar, typical of the area. Pinar del Rio has spaces dedicated to practically any artistic event: theatres, projects and events such as the Entre Mogotes Festival, the International Book Fair and the National Singing Competition Lecuona In Memoriam. Traveling to Pinar del Río is to visit the garden of Cuba.