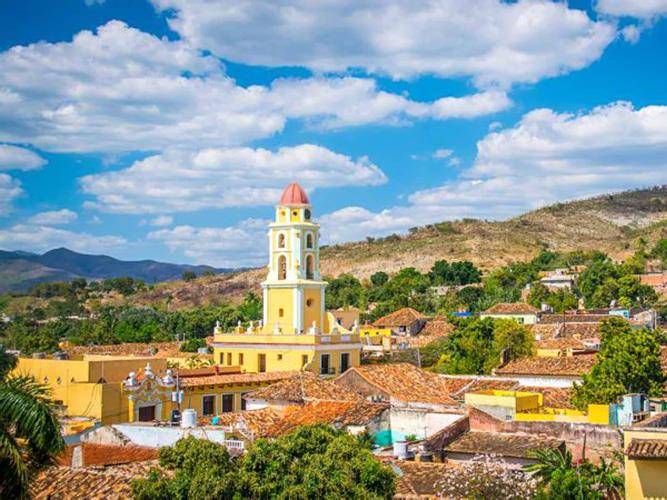 Situated in the central province of Sancti Spiritus, the formerly called Villa de la Santísima Trinidad (Holy Trinity) was founded in 1514 and was one of the first seven villages the Spanish conquistadors founded on the Cuban archipelago. It is a city that was forged with the sweat of the black slaves, the religious beliefs of these united to our Indian roots and to the colonizing Europe and are rooted in this town and today constitute our cultural identity. In the culture are added the musical talents of the territory, which has seen the birth of great musicians who have contributed significantly to Cuban popular music. Trinidad has one of the most complete and well-preserved architectural environments in the American continent and it has been named as Cuba's Museum City. The characteristic decoration of Trinidad's houses is based on neoclassic ornamentation, which is shown in murals, molds, wooden frameworks and beautiful iron-wrought railings. All of these constitute one of the city's major charms. The most interesting building is the Plaza Mayor de la Santisima Trinidad. There are many interesting things to see (e.g. Guamuhaya Archaeological Museum, Church of Santa Ana, Calle Simon Bolivar...) but the most impressive of all Trinidad's many museums is Trinidad Municipal Museum and a visit to the Taller Alfarero, a large ceramics workshop where traditional techniques are still used is also worthwhile. Close to this colonial city, the mountainous region of Escambray invites daring visitors to intense days of activities in the National Park of Topes de Collantes, located 800 meters above sea level and where Salto del Caburní (National Monument) stands out among numerous attractions. The vast and near Valley of San Luis, also known as Valley of the Mills, shows the splendor that the sugar industry gave to this villa at the end of the XVII century. This Valley, declared World Heritage by UNESCO, is also an important ecological reserve. It is said that at the time of its highest splendor, this area was the main producer of sugar in the country. There were here dozens of mills that could be seen from the top of the Tower of Manaca-Iznaga, 45 meters high and whose bell used to announce the start and end of the work sessions in the plantations of this sweet gramineous. A dozen kilometers from the village sits Ancon Beach, whose white sands are bathed by the warm Caribbean Sea, in an environment that invites visitors to practice nautical sports, including scuba diving in some 30 sites.