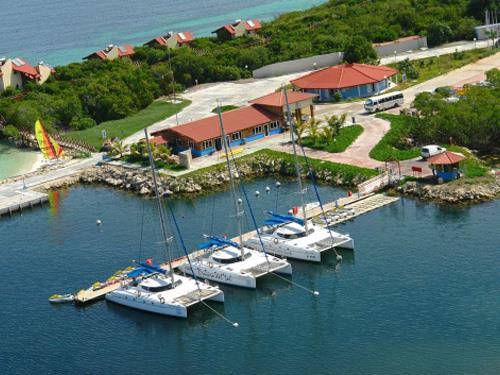 Cayo Santa Maria lies at the north of Villa Clara, in the Bahia de Buenavista ecosystem, declared by UNESCO as a “Biosphere Reserve”; in a setting rich with endemic species protected by a beach of incomparable beauty, with more than ten kilometers of fine white sand and a sea of varying shades of blue. A 48-km-long road on the sea connects the largest island of the Cuban archipelago with Santa Maria, Las Brujas, Ensenachos, among other keys. Nature itself has created the conditions for leisure, including a coral reef that attenuates the force of winds and waves, thus creating a unique environment to welcome thousands of vacationers who visit the region every year. A system of channels becomes a true aquatic labyrinth between the keys, while offering a huge potential for observation programs and nautical activities. In addition to the region's tourist potential, there exist unique conditions for the keys to be a safe haven for the local flora and fauna. Cayo Santa María is home to large colonies of flamingos, seagulls and anhingas, while its sea bottoms are inhabited by algae. The key is also a safe haven for amphibian mollusks, reptiles, mammals and birds. Other birds living on the key are the tocororo (Cuban trogon), which is Cuba's national bird, as well as woodpeckers and hawks. Among the mammals are deer and various species of hutias, including the rat hutia. The key holds remnants of pre-Columbian cultures in caverns near the beaches, which boast beautiful underwater seascapes.