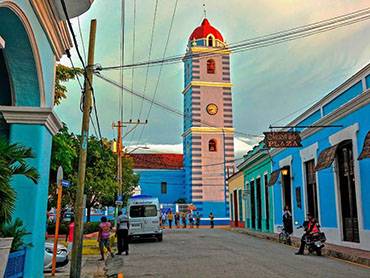 Sancti Spíritus is the most central province of Cuba and its northern and southern coastlines are washed by the waters of the Atlantic and the Caribbean respectively. Sancti Spíritus city is one of the Velazquez's original townships, was invariably settled on the margins of a river, and it preserves in its historic center buildings that show a divers variety of styles which have notably enriched for centuries the unruly distribution of its urban area. From the town's pleasant main square wander two blocks south to the Parroquial Mayor, a venerable yellow towered church whose early 16th-century origins make it the country's oldest, and across to the nearby Museo de Arte Colonial. The jewel in the provincial crown is, however, the beautiful and historic city of Trinidad, a UNESCO-protected national monument, recognized as one of the most charming cities in the whole of the Caribbean and Latin America. The mountainous region of Escambray invites daring visitors to intense days of activities in the National Park of Topes de Collantes, located 800 meters above sea level and where Salto del Caburní (National Monument) stands out among numerous attractions. Sancti Spíritus treasures peaceful and finest Caribbean beaches, all along the coasts of the Peninsula of Ancon, just outside Trinidad. Over the centuries, ocean currents have built up a soft, white beach here, and a few hundred meters offshore is an excellent reef for snorkeling and scuba diving. In the central region of the province you will be able to see the largest artificial lake of Cuba, the Zaza dam, which constitutes a perfect place for sport fishing, especially for trout. To the north, Caguanes National Park, recently declared by UNESCO a reserve of the Biosphere, treasures an important group of caves with plenty of interesting archeological sites and under water caves; natural habitat of a variety of fresh water sponges that can only be seen in this place.